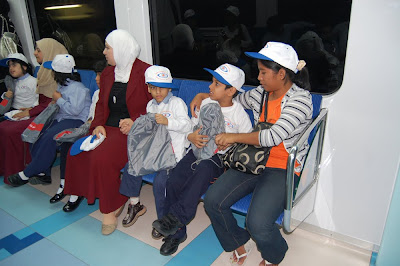 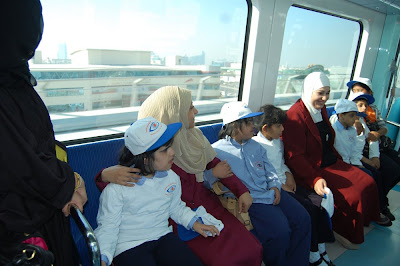 Dubai (UAE) – The Marketing and Corporate Communication Department at the Corporate Administrative Support Services Sector of Roads & Transport Authority (RTA), in cooperation with the Ministry of Labour, organized a recreational metro tour for people with special needs of the Emirates Center for Special Needs from Al Rashidiya Station to Nakheel Harbour and Tower Station.
Hind Al Tajir, Acting Director of Corporate Communication Dep’t at the RTA Corporate Administrative Support Services Sector, said: “The recreational trip is meant to enhance the integration of people with special needs into the community. RTA attaches paramount importance to this category of people, who constitute an integral part of the UAE community; which cares so much for providing decent live to all those living on its soil. It also aims to communicate the idea that this category is welcome to use the metro at any time at par with their unimpaired counterparts”.
Hind further stated: “During the trip the participants familiarized themselves with the facilities available at the metro stations and services provided to people with special needs. In addition, an elaborate description was provided to the attendants escorting special needs people highlighting the advantages offered to metro commuters, the safety systems, and all matters relating to the use of the metro”.
She pointed out that RTA provided an intelligent directional system through tactile directional floor signs to guide visually-impaired commuters, and aid them to move confidently and independently through various parts of the metro network. It has also provided low-floor ticket counters such that they are easily accessible to the wheel-chaired commuters, provided custom-built toilets, and launched a dedicated website for special needs.
In attendance were Fahd Hadi, Manager of Public Relations Section from the RTA; Abdul Rahman bin Ali, Deputy Director of Government Communication Dep’t at the Ministry of Labour; and Saeed Mohammed Abdul Ghani, Director of Emirates Center for Special Needs.
Posted by Imre Solt at 3:43 AM