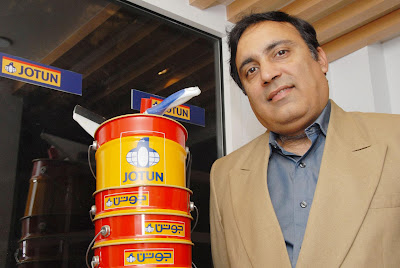 Jotun Paints, one of the world’s leading producers and suppliers of paints and coatings, has partnered with KidZania, a unique children's edutainment centre located within the iconic Dubai Mall, which replicates an actual city and allows children to role play various professions. The partnership has resulted in the creation of ‘Jotun’s House Painting’, which is one of several building-themed activities within KidZania where kids can role-play as professional painters and engage in tasks of varying degrees of difficulty for either interior or exterior applications. The creation of the branded establishment is aimed at further strengthening Jotun’s brand presence among the UAE end-user segment.

Set to offer an extensive range of hues, Jotun has identified the potential of its involvement with KidZania in providing children an excellent opportunity to cultivate their creativity by mixing and matching different colours. The children will be taught the painting process and allowed to feel and touch the paints - a move, which can potentially promote the ‘Do-It-Yourself (DIY)’ market in the Middle East. As part of the agreement, the company will also provide the paints, rollers, brushes and branded overalls to be used by the kids.

“Jotun is proud to be a part of KidZania as it provides children with an environment to learn and excel while tapping their various potentials,” said Ashish Vasudev, Marketing Manager, Jotun Paints - UAE. “Our presence within the edutainment centre will also be a wonderful way to build awareness and engage with the residents of Dubai and UAE, which can create a better market for our products. In addition to children being major influencers in the family, we would be able to reach our target - the end-user market - while creating a strong foundation of brand loyalty among the children who will grow to associate the name Jotun with vibrant coloured paints.”

Spanning a total of 80,000 sq. feet, KidZania features real buildings, shops and roads scaled down two-thirds of a child’s size and offers kids up to 15 years over 70 different occupations to play and get dressed up as. ‘KidZos’ is the accepted play currency, which children can use in various facilities within the edutainment centre, which can give children a fair appreciation of the use and value of money. It also features the KidZania International Airport, a hospital, bank, central town square, fashion catwalk, fire station, offices, pizza restaurant, race track, radio station, service station, supermarket, theatre and university, among others. Other leading brands that are also part of the amusement park include Emirates Airlines, HSBC, ENOC and Pronto Café.

“The concept of KidZania is based on letting children experience a real-life business and social environment, thereby broadening their knowledge and familiarizing them with real-world careers and responsibilities. By partnering with KidZania in this unique concept, we believe that this will open a new paradigm for us to interact with our target market and also know more about how Jotun can meet the end user needs,” concluded Vasudev.

Founded in 1926 in Norway, Jotun - one of the world's leading paint manufacturers established its presence in the Middle East in 1974, with Jotun UAE Ltd. Ever since, Jotun has expanded dramatically throughout the region and is the first paint manufacturer to be awarded the ISO 9001 certification. Jotun has consistently invested in state of the art factories including the recently opened plant in the Al Quoz area of Dubai, UAE - the biggest worldwide for Jotun and the Middle East.

Jotun has been at the forefront in terms of developing products specifically suited to local conditions. Three decades of experience in the Middle East region, has helped the company produce a variety of conventional and specialized coatings - each incorporating the latest technological developments while offering performance with economy - catering to the various product segments and demands of the different markets. Today, Jotun's diverse product range includes Decorative, Protective, Marine, Floor/Concrete Protection, Powder Coatings and Intumescent coatings, bearing a solid testament to the company's reputation of being truly a single source solution for clients, consultants and contractors alike.
Posted by Imre Solt at 4:25 AM