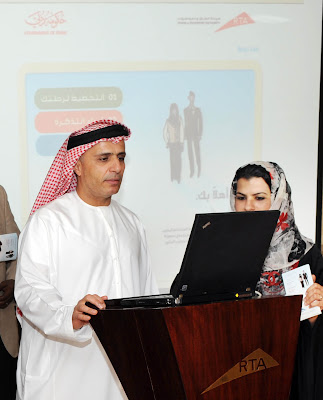 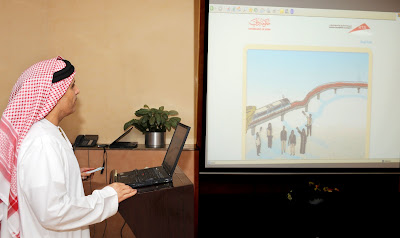 H.E. Mattar Al Tayer, Chairman of the Board and Executive Director of Roads & Transport Authority, has launched the new portal of Dubai Metro (www.rta.ae/dubai_metro) along with the voice browser service of RTA website for the use visually-impaired surfers, in order to enable them benefit from the services offered by the RTA. In this capacity, the RTA has become the first Middle Eastern government body to offer such type of services to this segment of the community.

“The new portal has been designed following an extensive study on how to plan a Dubai Metro journey. The Guide starts with the planning process, and identifies the stations nearest to the starting and terminal point of the journey. It also sets the locations of stations to be used, and the most suitable method of arriving at the station through various transportation means such as buses, taxis and marine modes, besides checking trains’ arrival and departure timings” said Al Tayer.

“The second step involves buying tickets, introducing the features of Nol cards & tickets, journey cost & calculation, and the locations of buying, topping-up and or adding trips to Nol cards. The third step includes information about Dubai Metro carriages such as different classes, ladies & children exclusive carriages, wireless internet service (WiFi), special needs services on board the metro trains, and the rules & regulations of using the metro” he continued.

RTA Chairman of the Board and Executive Director further added: “RTA has upgraded its website (www.rta.ae) through adding Voice Browser service in a bid to showcase the e-services offered by the RTA such that visually-impaired users will be able to browse the website and check its contents fairly easy regardless of the extent of their visual disability. Launching this service comes in the context of RTA efforts to reach out to all segments of the community; particularly the disabled as they are an integral component of the community and the RTA is always seeking to address the requirements of this category and communicate with them in a way that adds to their social integration”.

“RTA has carried out an extensive study before the launch of this service spanning RTA visitors from visually-impaired individuals. Based on their feedback, RTA identified the services to be offered to them. This service is marks an initial phase that will be followed by other phases through which more sophisticated services will be added. RTA has applied high standards to meet the needs of special needs in the new portal, enabling accessibility of the system, improved format for presentation of RTA e-services, and exploring the possibility of using the system without having to use a special keyboard for visually-impaired individuals” concluded Mattar Al Tayer.
Posted by Imre Solt at 2:26 AM