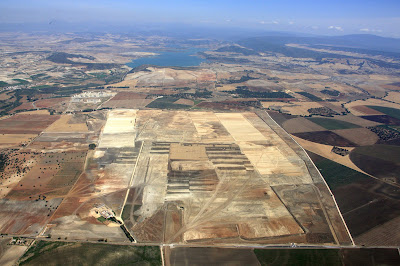 The two Spanish plants will have up to 7.5 hours of thermal storage capacity
and will provide clean and safe energy for 80,000 homes and
prevent 90,000 tons of CO2 emissions every year

Abu Dhabi, 19th January 2010: Torresol Energy, a joint venture between Masdar, a wholly-owned subsidiary of the Mubadala Development Company, and SENER, a leading international multidiscipline engineering company, with offices in Abu Dhabi, has secured US$760 million project finance loans for the construction of its twin Concentrated Solar Power (CSP) plants - Valle 1 and Valle 2 - in Andalucía, Spain. The total investment value for the two plants is US$1bn.

Work on the two 50 MW Concentrated Solar Power (CSP) plants began in March 2009 and is the first time that twin thermo solar plants have been built simultaneously. Both plants incorporate energy solutions developed by SENER, including molten salt thermal storage capacity of up to 7.5 hours. This means that the state-of-the-art plants will be capable of generating electricity at night and through periods of poor sunlight, enabling a continuous supply of electricity and overcoming intermittency, one of the drawbacks of some renewable technologies.

Valle 1 & 2, together with the Gemasolar Central Tower Plant (17MW / 110GWh per year), which was project financed in November 2008 and continues to progress construction as expected, represents a total investment by Torresol Energy of $1.4bn across 3 CSP projects over the past 12 months.

Talking on the announcement Enrique Sendagorta, Chairman of Torresol Energy, said: “We are very proud that Valle 1 and Valle 2 solar plants secured this important financial support, which allows us to continue on schedule with our strategic plans”.

“With a combined production of 340 GWh per annum, which equates to the clean and safe energy for over 80,000 homes and a saving of 90,000 tons of CO2 emissions every year, Valle 1 and 2 will be leaders in the delivery of concentrated solar power and a major contribution to the region’s power supply. A significant feature of these plants will be their ability to produce electricity at night and at times of poor sunlight, which is obviously an important consideration for consumers who require and demand uninterrupted electricity supplies,” he added.

Dr. Sultan Ahmed Al Jaber, CEO, Masdar, said: “The CSP projects currently under construction in Spain will introduce and test new technologies, which will help promote CSP as an economically competitive and viable alternative to traditional power sources. Through Torresol Energy, we are actively promoting the development and operation of large-scale CSP plants throughout the world and hope to implement additional projects across Southern Europe, North Africa, the Middle East and the Southwest United States”.

The construction of the new plants will have additional benefits for Spain, such as an estimated 3,200 new direct employment opportunities during the two year construction period – with a further 150 specialised professionals required to manage operations after completion.

A joint venture between the companies SENER and MASDAR, Torresol Energy was set up with the aim of becoming a global leader in the Concentrating Solar Power (CSP) sector, promoting the development and operation of large-scale CSP plants throughout the world – especially in the “sun belt”: southern Europe, including Spain, North Africa, the Middle East and the south-west United States.
Torresol Energy is currently focusing its efforts on the GEMASOLAR project (17MW / 110GWh per year) and the construction of the two aforementioned 2x50 MW / 2x170 GWh per annum parabolic trough plants, VALLE 1 and VALLE 2, in the province of Cadiz (South of Spain).
In the medium term, Torresol Energy plans to build at least two CSP plants each year, introducing and testing new technologies in order to turn CSP into an economically competitive and viable alternative to traditional power sources. The main aim of Torresol Energy’s research activities is to drive down the costs of power generation.
For further information about Torresol Energy´s plants, please visit www.torresolenergy.com

Masdar is Abu Dhabi’s multi-faceted initiative advancing the development, commercialisation and deployment of renewable and alternative energy technologies and solutions. Masdar is driven by the Abu Dhabi Future Energy Company (ADFEC), a wholly owned company of the government of Abu Dhabi through the Mubadala Development Company.
For more information about the Masdar Initiative, please visit www.masdar.ae
Posted by Imre Solt at 7:30 AM