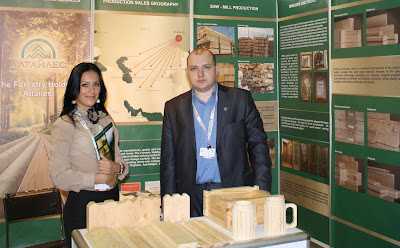 Russia focuses on advancing investment climate in wood industry in 2010

Russia is focusing on advancing the investment climate within its wood industry this year, with aims to recover from the sharp fall in export demand for timber it has witnessed as a result of the global financial crisis. In line with this, Russian timber company ‘Forestry Holding Altailes’ is marking an extensive presence at the ‘Dubai WoodShow 2010’, the Middle East's only wood-focused exhibition of its kind, to showcase its high quality timber goods among regional and global buyers. The company’s participation at the event is part of its plans to maximise opportunities in the Middle East.

According to recent reports, there has been a significant decline in the production of solid wood panels in Russia, which dropped by 39.8 per cent during the first half of 2009, compared to the corresponding period in 2008. During the same period, materials such as plywood (declined 36.2 per cent), wood stoves (dropped 30.9 per cent), timber (dipped 22.4 per cent), and wooden building structures (decreased 26.9 per cent) also followed suit. However, the figures released by the Minister of Industry and Trade of Russia have shown that the sliding output in the wood sector has slugged compared to the rate of decline seen in the fourth quarter of 2008, with most commodity groups witnessing a 10 to 25 per cent rise in the level of capacity utilisation.

“Given the present state of the Russian wood trade, our highest priority is to develop an effective strategy to make adjustments in our manufacturing process to be able to keep pace with the ever-changing market requirement,” said Loginov Dmitriy, Head of the Marketing Department, Forestry Holding Altailes. “The ‘Dubai WoodShow 2010’ has been an excellent venue to gather the latest industry intelligence that will help us maximise our partnerships with our most important wood trading partners, and we believe that participating in vibrant discussions in the event will open up profitable opportunities for us.”