Water consumption decreased by 37 % and electricity by 6% in 2008, driven by awareness campaigns: DEWA 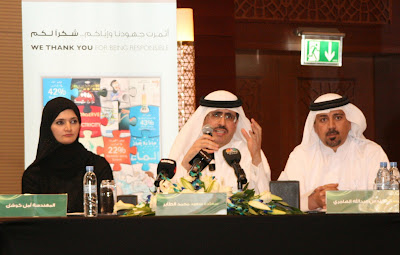 Under the directives of Mohammed bin Rashed

Water consumption decreased by 37 % and electricity by 6% in 2008, driven by awareness campaigns: DEWA

“DEWA introduced a series of initiatives to encourage consumers to reduce consumption and eliminate wastage of electricity and water, with the goal of inculcating a culture of saving natural resources and preserving our environment, as part of the directive of HH Sheikh Mohammed Bin Rashed Al Maktoum, UAE Vice President and Prime Minister, Ruler of Dubai.”


“These campaigns were focused on raising awareness amongst people of the importance of saving water and electricity for the welfare of future generations as well as increasing their involvement in prudently using the two valuable resources”.

DEWA’s campaigns included “Now you Know, Don’t let it go” campaign launched in June 2008, on the heels of the “Your Decision” campaign which began February 2008. The campaign was implemented in government departments, private organizations and shopping malls to highlight the importance of conserving electricity and water.

Al Tayer added: “DEWA appreciates the cooperation extended by all communities and business in Dubai to our conservation campaigns. We are proud that we have a community that is willing to change their ways with the long-term goal of reducing consumption and protecting the environment for a brighter future for their children and grand children.”

The DEWA campaigns did not just deliver messages to the target audience but they also sought consumers’ feedback through questionnaires so as to devise more acceptable schemes of conserving energy and water.

Mr. Al Tayer also felicitated 9 government departments reported substantial savings in water and electricity consumption. He also felicitated organizations that played a key role in making these campaigns successful by helping to disseminate the messages of conserving water and electricity on their premises, including 12 government department and 18 private companies and shopping malls. Also, 29 hotels were felicitated by DEWA.

Al Tayer lauded the efforts made by these partners and hailed their contribution to these campaigns.
Posted by Imre Solt at 7:04 AM